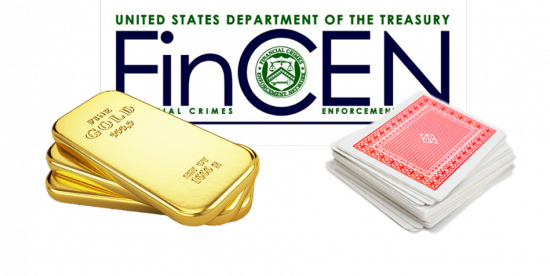 As if to finish the year on a watchful note, FinCEN announced December assessments against two businesses that operated in ways that could conceal the flow of dirty money. They both violated the Bank Secrecy Act (BSA), yet neither one was a bank.

The first was Oaks Card Club, which settled for a $650,000 fine. Card clubs are gaming venues where only cards are played. Unlike casinos where bettors play the “house,” bettors play each other and the winner or winners take the jackpot. Oaks Card Club makes its money by collecting rental fees from players. FinCEN considers card clubs to be financial institutions under the BSA and therefore can be regulated.

The Oaks Card Club has over 100 years of history. It prides itself as having been the “consistent center of action” where “gaming has been continuous since 1895.” Unfortunately, an area of consistent and continuous inaction was attention to anti-money laundering (AML) requirements.

“Oaks Card Club…had been subject to the Bank Secrecy Act for quite some time,” said FinCEN Director Jennifer Shasky Calvery. “That should have allowed enough time to become very familiar with what’s right and what’s wrong.”

The club allegedly trained employees to notify gamblers if their cash transactions exceeded $10,000. For transactions exceeding this level, the club was required to file a Currency Transaction Report (CTR) with FinCEN. When individuals or businesses break up large transactions into amounts that fall short of $10,000 to avoid reporting, these are called structured transactions and are forbidden.

The second assessment was against B.A.K Precious Metals, which received a $200,000 civil money penalty. In the past five years, B.A.K. began facilitating very large transactions — as high as $23 million — without conducting due diligence on clients.

“Gold and other precious metals are a highly concealable, transportable, and concentrated form of wealth that can be readily abused by criminals seeking to move and hide dirty money.” said FinCEN’s Calvery.

Making matters worse, B.A.K. received a 2011 BSA compliance examination by the IRS, which determined it had no AML program in place at all. When the IRS came back in 2013, examiners determined the program was lacking in material areas. According to the enforcement action, “B.A.K., its owner, and its compliance officer often ignored the AML program.”

These actions may signal a trend for industries like gaming and precious metal that are subject to BSA.

“FinCEN is trying to prevent movement of illicit money through illicit means outside typical financial institutions,” said Zimiles. “The targeted industries should be careful.”

If banks, Third-Party Payment Processors (TPPPs), or Third-Party Senders (TPSs)  have  customers like these in their portfolios, they pose new risk. Know Your Customer (KYC) services like G2 Business Classification™ and G2 Content Monitoring™ can help banks, TPPPs and TPSs detect these kinds of businesses, even if they are unaware of them.

Contact Support
© Copyright 2021
We use cookies to ensure that we give you the best experience on our website. If you continue to use this site we will assume that you are happy with it.OkNoPrivacy policy